CHWs in the Time of COVID-19: Experiences & Insights from CHW Leadership 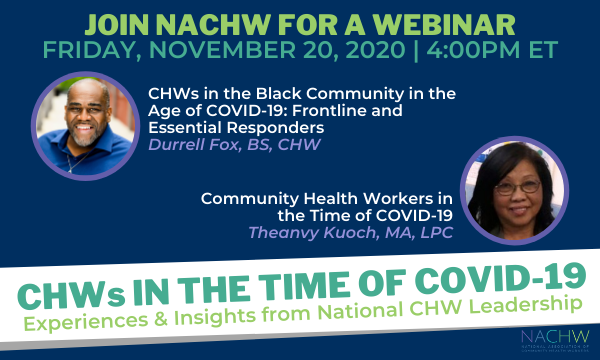 About Theanvy Kuoch: Theanvy Kuoch is a survivor of the Cambodian Holocaust and came to the United States as a refugee in 1981. She founded and has directed Khmer Health Advocates since 1982 and is currently the Chair of the National Cambodian Health Initiative which was founded in 2003. She holds a Master’s Degree in Refugee Mental Health and Contextual Family Therapy and provides therapy as part of the KHA torture treatment team. In 1991, President George Bush named her the “Point of Light” for her volunteer work with refugees.

About Durrell Fox: Mr. Fox is a Community Health Worker with over 28 years of experience providing outreach, direct services, case management support and advocacy for HIV+ adolescents/young adults, their families and communities. He currently serves as a CHW-Health Equity Consultant at John Snow, Inc. and recently served as a Technical Advisor for the Massachusetts Department of Public Health’s Prevention and Wellness Trust Fund (PWTF), which employs over 70 CHWs across the state. He is a proud member of the CHW workforce and continues to serve in a volunteer CHW role coordinating and staffing a young men’s rites of passage program. Since 1991, Durrell has been involved in local, state, regional and national CHW workforce development efforts including serving as one of the founding members of the CHW Section of the American Public Health Association (APHA), the American Association of CHWs, the Massachusetts Association of CHWs, the New England CHW Coalition, the Advisory Workgroup for the Massachusetts CHW Board of Certification and the National Association of CHWs.

I want to attend